All roads lead to Rome DOCSIS 4.0

One of the key features of the new DOCSIS 4.0 specification is expanding our cable plant spectrum from today’s 750MHz/860MHz/1GHz to 1.8GHz. This nearly doubles the spectral capacity for much of today’s HFC networks.

Moving the top end of the spectrum up to 1.8GHz presents a number of new challenges as increasing your spectrum will require more energy and higher frequencies are subject to more cable and tap losses. For example, at higher frequencies you get more attenuation, which means more power to overcome the cable loss at these frequencies. The end result is the same in that we need more signal power to overcome these challenges. However, this need for additional amplification increases something known as Total Composite Power (a.k.a. total power) that, when applied to today’s HFC designs, slams straight into the distortion problem, known as intermodulation.

Rethinking HFC with DGA
Over the years with all the technological advances in cable, we have never regretted adding more spectrum to our cable networks. With the technological advances in DOCSIS 4.0, we have the opportunity to rethink how we look at HFC network design. We recognize that cable has not only a long life left, but a long useful life ahead of it. To take advantage of the potential capacity increase that is available in DOCSIS 4.0, we need to evolve from traditional outside plant designs. In this article we discuss a new way of providing last mile access that not only preserves today’s investment in coax but allows for maximizing the value of that investment.

The transmission power dance is going to get more nuanced in designing for 1.8GHz. Surprisingly, one way to solve this will involve additional electronics in the network, which runs counter to how we’ve traditionally evolved HFC. These added electronics actually generate a number of benefits that are not immediately obvious. The end result of distributing the gain throughout the cable network is called a Distributed Gain Architecture (DGA).

These additional electronics, which will intensify the signal power at each step, actually end up being far more simplistic in their design than legacy amplifiers.

If you add more signal boosting points in your network, each stage requires less of a step up and less consumed power to increase the signal strength to reach the next amplification stage (See Figure 1). One amplifier supplier is now field-testing a device that dispenses with the need for diplex filters and provides enough gain to meet the design requirements of DOCSIS 4.0 at its highest modulation order of 4K QAM. The net effect is the traditional, high-power finely-tuned amplifier turns into a lower power, simple signal booster. Today, our amplifiers require employees skilled in the craft to operate and fine-tune them; these new boosters will be much simpler in their design and require far less maintenance. 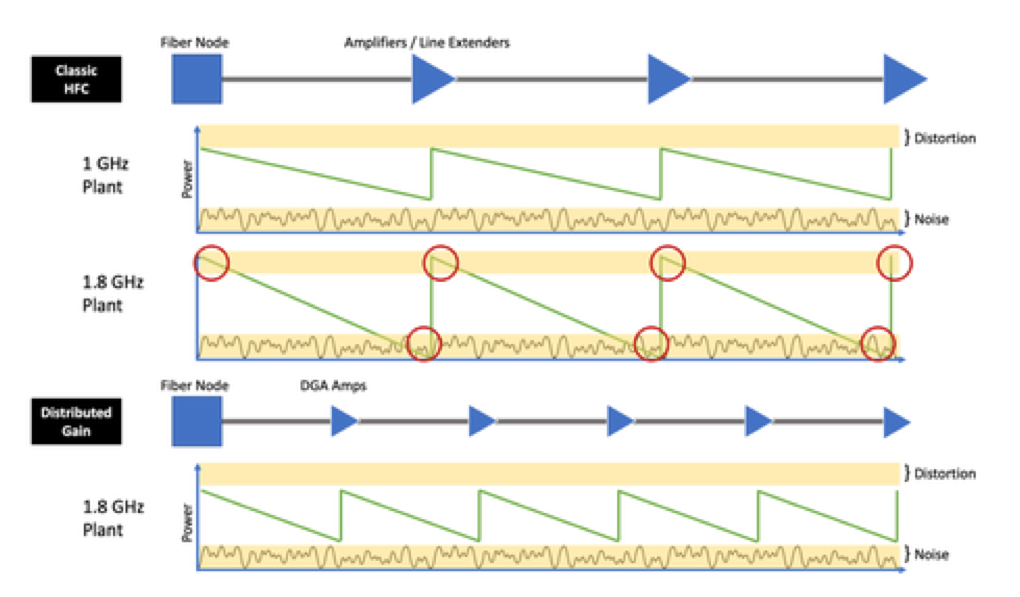 Comparison of transition to 1.8GHz for Classic HFC vs. Distributed Gain Architecture

The new DGA devices will be more reliable as they are able to leverage monolithic microwave integrated circuits (MMICs) rather than the more complicated hybrid thin film or multiple chip module (MCM) circuits. These MMIC amplifiers can avoid the points of potential failure in the higher power hybrids or MCMs used in line extenders, and using less power these devices have lower device operating temperatures. These two reasons will result in much higher reliability. It is simple in its elegance (See Figure 2). 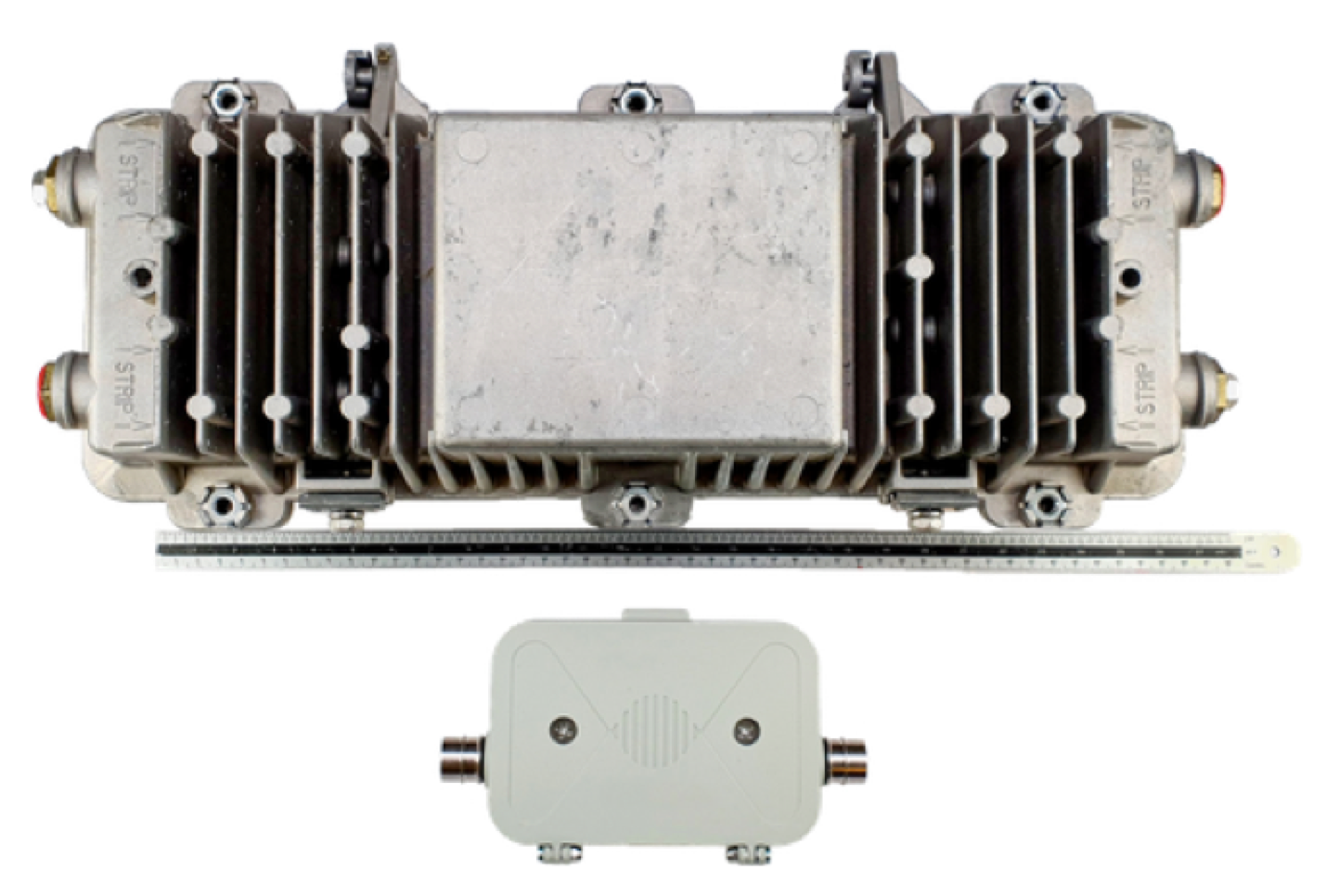 Size comparison of today’s typical amplifier vs. a DGA amplifier

Advantage: DGA
The advantages of a DGA do not stop there. This type of new plant design will reduce total electrical power consumed by possibly 25% or more versus what you would traditionally expect to use in running a 1.8GHz network.

With outside plant amplification closer to the customer, cable modems will no longer need to be transmitting in the upstream near the top of their power output range, especially as the upstream frequency range is increased to as high as 684MHz. Across millions and millions of homes, this will equate to a substantial amount of power consumption savings. The reduction in power consumed in the outside plant and customer premise equipment provides an opportunity to reshape the power distribution network provided over the cable network.

Do you wait until the need for 1.8GHz before approaching such a network change? Simply, no. This is our opportunity to begin building out the network of the future today.

As an analogy, we tend to build roads when they are needed, not when in the planning stage. How many times have all of us sat in traffic due to never-ending construction? The time is now for us to begin building the roads we will need in the future (how much spectrum is going to be needed in a cost-effective manner) for the on-ramps modulating traffic onto those roads (CMTS and DAA devices) that will allow cars (CPE) to perform at the optimum speeds required to provide the transit needed for future services (video, gaming, conferencing, home healthcare, etc.).

There is a way to apply this new approach in an incremental fashion. Some of the problems described already exist at frequencies in use today – namely between 1GHz and 1.2GHz. Since this frequency band presents some of the same challenges mentioned, it is difficult to run DOCSIS signaling at its most optimal levels. For instance, the DOCSIS 3.1 OFDM downstream transmission is difficult to run at 4K QAM modulation, so it is not unusual to see transmissions falling back to 1K QAM modulation in this band.

You can deploy these new low-gain amplifiers opportunistically on certain legs of HFC nodes, between typical high-power amplifiers. These boosters can be placed as a mid-span device enabling 4K QAM modulation and the most efficient DOCSIS 3.1 operation. As these 1.8GHz boosters are placed in the HFC network, you will already be moving towards Extended Spectrum DOCSIS enablement of your network.

This solution’s effectiveness cannot be overstated: it simplifies the HFC plant’s electronics, yielding a substantial reduction in plant maintenance. At the same time, it enables DOCSIS 4.0 up to 1.8GHz even at the highest possible efficiency, while reducing overall power consumption both for the operator and our customers, substantially narrowing the gap between HFC and PON performance. We can act now to plan and build out the outside plant of the future, be bold in moving to new technologies, and stay true to meeting the needs and surpassing the expectation of our customers.