The Sky is Falling: Could OTT From Unexpected Places Herald The End Of Television As We Know It? (Part 1)

There are many who say television is experiencing its second “Golden Age.”  More content is available than ever before, from a growing list of sources.  Old television programs and movies are also available.  Many networks and studios have put their libraries of television online through both their own services and those of third parties, such as Netflix and Hulu.

Live television in digital form can be received over the air and through cable and satellite from stations and networks around the world.  Some of these sources stream their content on the internet themselves. All of this material, live and recorded, is at risk of being streamed by third parties without consent.
Video Piracy Then
In earlier days of video piracy, an “illegal box” was obtained through unscrupulous and possibly illegal methods.  Many of the boxes were stolen goods themselves – originating from legitimate cable company sources and then modified to receive programming without proper authorization.

Better security efforts by the cable MSOs (Multiple System Operators) reduced these forms of theft to a trickle. Bootleg videotapes and DVDs of Hollywood movies could be found being sold in the back of the barber shop or delicatessen. Just as with the legitimate video stores they once challenged, these sources too have gone away in favor of online streaming.
Video Piracy Today
The ease of which a user can avail themselves of unauthorized content makes today’s problem different from use of illegal boxes of the past.

Let’s look at the details:

Generic Hardware. The hardware used to receive and display a video stream on a television screen is widely available from a variety of retail sources.  Many of these same devices are used by legitimate streaming services. Streaming players very inexpensive; a teenager could afford one after a night of baby-sitting.

Easy Adaptation. The generic hardware can be modified to receive illegal streams by installation of software.  There is nothing inherently illegal about this software or the process of installing it. The installation process is so easy that a purchaser of the generic hardware could follow instructions available on the internet to install the software themselves, or go through a third-party agent to perform the modifications for them.

Streaming Network Ecosystem. An entire global network of streaming sources and servers has evolved.  These services collect and 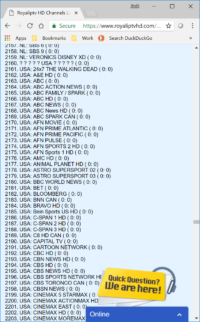 catalog streams or material from a variety of sources and make them available for others to receive or re-stream.  This makes tracing the source of an illegitimate stream difficult.  Many services are available for re-sale by brokers or middlemen, making it more difficult to track down customers should one establishment become compromised.

Cottage Industry. The third-party agents involved in installing the new software can also install the appropriate links to purveyors of unauthorized content.  They can then act as agents of those parties and provide end users with subscriptions to streaming services from those services or their re-streaming partners.
The Other Streaming Video Services
There are many large companies offering completely legitimate streaming services, such as Netflix, HBO, Sling TV, Hulu, Amazon, CBS, etc.  There are also smaller legitimate sources of free material such as Crackle, Viewster, PlutoTV, and SnagFilms.  A customer could start out intending to “go legit,” buy the required hardware and subscriptions, and downgrade their cable service to broadcast basic or internet only.

This same customer could take the same hardware, download a few bits of software, and enter the world of unauthorized streaming.  They can then stop their subscriptions to the above-mentioned services and continue to watch the same (and often much more) programming.

Less than legitimate program aggregation sources include Terrarium, Royal, Royalty, Mobdro, Morpheus, Freeflix, Kodi, and many more.  Each of these has their own software to load on the player hardware.  Some have an advanced user interface rivaling the best legitimate services.  It would be difficult for the end user to know that many of these are not legitimate.